While women have certainly made strides in many areas of the business world, when it comes to entrepreneurship, a significant gender gap remains. Around 10.2% of women between ages 18 and 64 are new entrepreneurs, a rate around three-quarters that of men, according to the 2018-2019 Womenâs Report from The Global Entrepreneurship Monitor. Though thereâs clearly still room for growth, women who are starting their own businesses have the opportunity to take ownership of their long-term financial goals, including how much they sock away in a savings account. But not all locales are equally conducive to their success. As such, SmartAsset sought to uncover which metro areas are best for women entrepreneurs.

This is SmartAssetâs second study on the best places for women entrepreneurs. Read the 2019 version here. 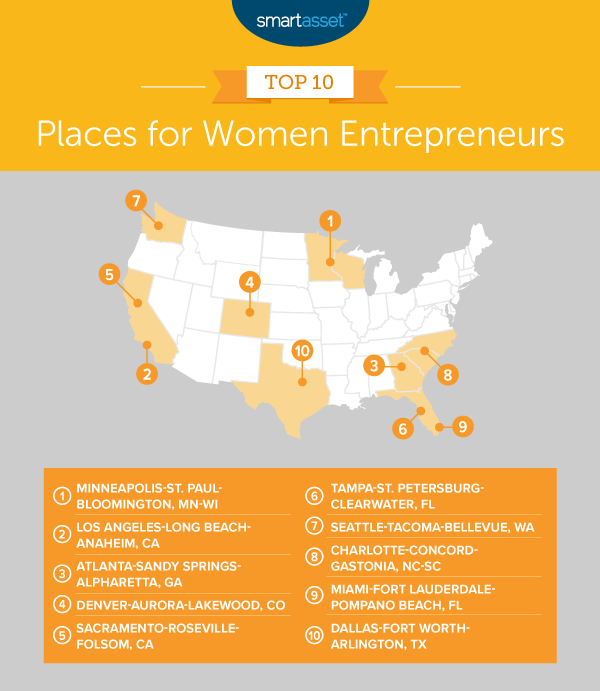 For the second consecutive year, the Twin Cities metro area of Minnesota-Wisconsin is the best place in the country for women entrepreneurs. The unemployment rate for women in this area was 1.8% in 2019, the lowest rate for this metric in the study. Furthermore, 84.49% of businesses in the Minneapolis area had a profit or broke even in 2017, the second-highest percentage across all metro areas we analyzed. Women-owned businesses make up a little less than 3% of all businesses with greater than 500 employees in this metro area. While relatively low, that figure is actually the eighth-highest percentage for this metric in the study.

The Los Angeles-Long Beach-Anaheim, California metro area, which includes parts of Orange County, is the No. 2 place in the nation for women entrepreneurs. Due in part to its large population, Los Angeles area has 64,632 women-owned businesses overall, the second-highest number for this metric in the study (behind only the New York City metro area). Los Angeles also ranks ninth out of 50 in terms of the percentage of businesses that are owned by women, at 20.99%, and third out of 50 in terms of women-owned businesses as a percentage of businesses with greater than 500 employees, at 3.20%.

There are also a substantial number of women-owned businesses in the Atlanta metro area. The raw total is 24,130, sixth-highest in the study, and that represents 21.92% of all businesses, the fourth-highest in the study. Women in the Atlanta area earn 76.79% as much as men, the 12th-best rate for this metric across all 50 metro areas we analyzed. The metro area also benefits from the fact that Georgia ranks first for the number of new state-wide business applications in 2020 relative to the previous five years, at 142.77%.

New businesses represent 10.22% of all establishments in the Denver-Aurora-Lakewood, Colorado metro area, the third-highest percentage for this metric in our study. A lot of the establishments in the area at least break even, too â 83.90% to be specific, the seventh-highest percentage we observed for this metric in the study. The Denver area also ranks seventh-best for the percentage of businesses that are owned by women, 21.78%.

Sacramento is the capital of California, and the metro area around the city takes the No. 5 spot in terms of the best places to be a woman entrepreneur. The Sacramento-Roseville-Folsom metropolitan area saw 84.70% of businesses either turn a profit or break even in 2017, the highest percentage we observed. The startup survival rate in California is 81.33%, placing the Sacramento area fifth in that metric. New businesses in the area represent 9.10% of all businesses, good for 12th overall.

Women in the Tampa-St. Petersburg-Clearwater, Florida metro area earn 79.68% as much as men, the sixth-best ratio of the metro areas included in this study. Tampa also benefits from the fact that Florida fares well in terms of new businesses created in 2020 (a state-wide metric): The total new business applications filed this year is 113.42% of the average filed over the past five years, the ninth-highest rate. Tampa also finishes in 11th place out of 50 for both unemployment metrics we measured. The unemployment rate for women in 2019 was 2.4%, and the overall unemployment rate in September 2020 was 6.1%.

There are 17,724 businesses owned by women in Seattle-Tacoma-Bellevue, Washington metro area, ranking 10th of 50. That figure represents 21.25% of all businesses in the Seattle metro area, the eighth-highest percentage in the study. The pay gap in Seattle, though, remains large. Women earn just 68.21% as much as men there, placing the area 46th out of 50 for this metric.

The Charlotte-Concord-Gastonia, North Carolina-South Carolina metro area comes in at No. 8. Women-owned businesses make up 3.26% of all businesses with greater than 500 employees. The only other metric for which the Charlotte area finishes in the top 10 is the percentage of businesses that broke even or turned a profit, coming in ninth at 83.14%. The area has just 8,581 female-owned businesses, putting it near the middle of this list at 24th out of 50.

In the Miami-Fort Lauderdale-Pompano Beach, Florida metro area, there are 36,496 businesses owned by women, representing 21.88% of all the businesses in the metro area. That places Miami in fourth and fifth in those two metrics, respectively. The Miami area hasnât been doing well in terms of employment lately, though. The unemployment rate in September 2020 was 10.1%, in the bottom five of this study. That said, the metro area ranks fifth out of 50 for women-owned businesses as a percentage of businesses with greater than 500 employees (3.17%). Furthermore, it ranks ninth overall for the statewide metric of new business applications in 2020 relative to previous years (113.42%) and third overall for women-to-men pay ratio (81.19%).

The final area in the top 10 of this study is Dallas-Fort-Worth-Arlington, Texas. There are 24,383 businesses in the area owned by women, the fifth-highest rate for this metric in the study. Of the businesses in the metro area with more than 500 employees, 3.19% of them are owned by women, which is the fourth-highest percentage for this metric across the 50 areas we analyzed. A lot of businesses in the area donât fare as well as they would probably like, though: Only 79.42% break even or turn a profit, 44th out of 50 in the study. However, the metro area ranks sixth overall for the statewide metric of new businesses as a percentage of total businesses, at 9.54%.

To find the best metro areas for women to be entrepreneurs we compared 50 of the largest metropolitan areas in the country across a number of metrics. Though weâve done this study in previous years, we added two metrics this year to give more timeliness to our results: new business applications in 2020 compared with the average of the previous five years, and the unemployment rate in September 2020. Here are all the metrics we used: