According to data released in May 2021 by the American Bankers Association, there were 365 million open credit card accounts in the U.S. as of the end of 2020.

See related: How to choose the best credit card

How many Americans own credit cards?

Despite the decline in credit card accounts, credit cards are found in most Americans’ wallets. Federal Reserve Bank of Atlanta data released in May 2021 found that in 2020, 79% of consumers had at least one credit card or charge card, which is the highest percentage since the Fed began conducting the Survey of Consumer Payment Choice in 2008.2

A credit card is defined as a card that allows the cardholder to make a purchase by borrowing funds paid back to the credit card company later. A charge card is a type of credit card that must be paid off in full every month. 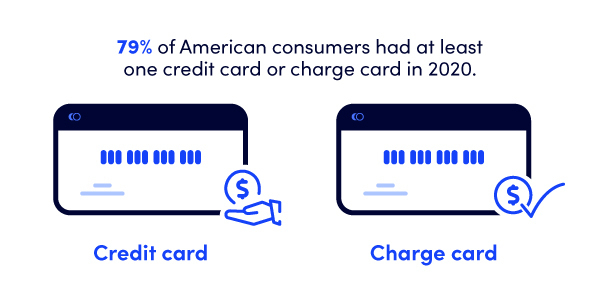 Using the U.S. Census Bureau estimate of 253 million adults in the U.S.,3 that means nearly 200 million American adults have a credit card, a charge card or both.

However, lenders have shown caution when extending new credit, perhaps due to Americans’ financial challenges during the pandemic. Average new account credit lines decreased to $3,696 in the first quarter of 2021 from $5,128 the year before, according to a May 2021 TransUnion report. And the number of credit cards fell from 457.6 million in Q1 2020 to 454.6 million in Q1 2021.4

According to a survey conducted in August 2020 by Travis Credit Union, more and more Americans are going cash-free. Fifty percent of respondents said they used cash less during the pandemic than they did before the COVID-19 crisis. On top of that, 58% said they planned to stop using cash entirely after the pandemic.5

See related: How COVID-19 is possibly leading the cashless revolution

Types of credit cards Americans own

Older consumers tend to carry the most cards. According to Experian, in the third quarter of 2020, baby boomers – those between 56-74 – carried, on average, 4.61 cards followed by:

Subscribe to get the week’s most important news in your inbox every week.

Keep an eye on your inbox—we’ll be sending over your first message soon.

Young Americans are waiting longer to get their first credit card, possibly because younger consumers also are dealing with student debt. Additionally, the Credit CARD Act of 2009 bans credit card approvals for anyone under 21 years old unless they have an adult co-signer or can prove they have sufficient income to pay the bills.

However, that doesn’t mean young people are not using credit cards.

The Ascent survey showed that while nearly 55% of consumers have maxed out at least one credit card, Generation Z (44%) was least likely to do so, followed by baby boomers (48%), millennials (51%) and Generation X (66%).6

However, millennials were most likely to fall more deeply into credit card debt because of the pandemic, according to a CreditCards.com survey conducted in May 2020. More than a third of millennial cardholders – 34% – said they incurred more debt during the pandemic compared to 23% of Generation Xers and 15% of baby boomers.9

Where you live can also play a role in how many credit cards you have. In every state, the average number of credit cards owned by consumers dropped in 2020, according to a 2021 study by Experian.7